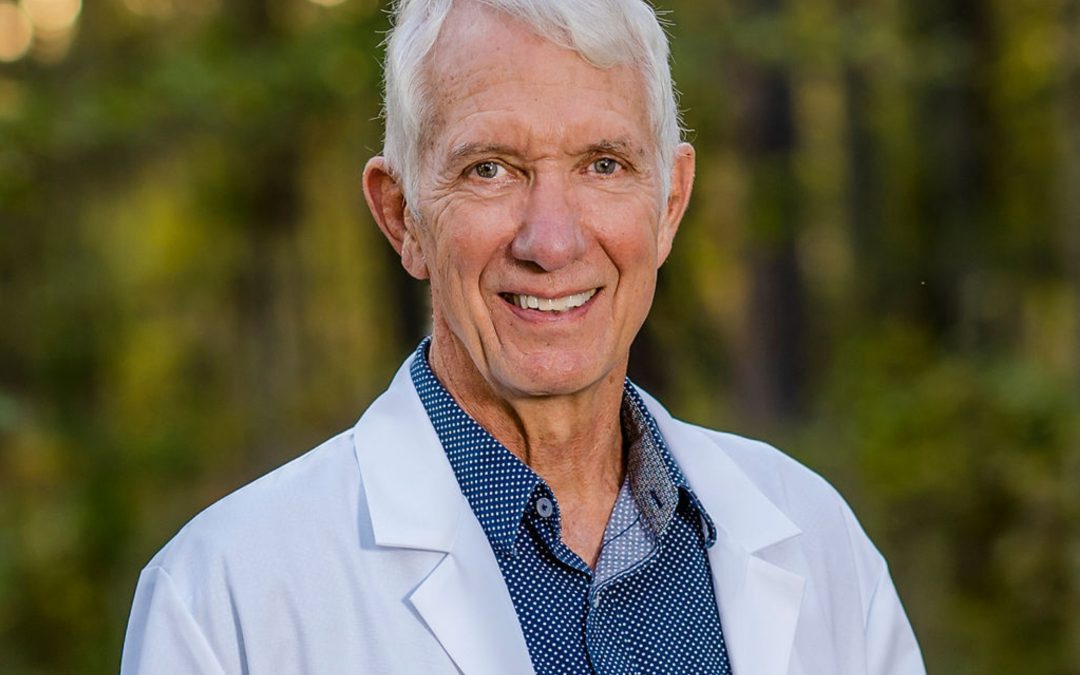 In 1986, the space shuttle Challenger exploded, and the world’s worst nuclear disaster to date occurred at the Chernobyl power plant. The Oprah Winfrey Show made its national debut, and Halley’s Comet paid a visit to our solar system. It was a busy year full of history-making events that captivated the world’s attention. Amidst all of those headlines, a man named Dr. Stephen Taylor quietly moved to Vivian, Louisiana that same year to set up his medical practice with North Caddo Medical Center. He never even knew that the small town in Northwest Louisiana existed until he was recruited to become part of its hospital and community. Dr. Taylor has graciously served the people of Vivian and its surrounding areas for the past thirty-five years and, now, retirement is knocking at his door. Before he answers that knock, let’s go back…way back.

A young Stephen (Steve) Taylor vividly remembers his granddad, who also went by the name of Dr. Taylor. The elder Dr. Taylor practiced medicine in the town of Blair, Oklahoma. Back in the day, his granddad would make house calls and was often paid in home-cooked meals, eggs, or livestock when patients and their families couldn’t afford to pay. Even as a child, seeing his granddad really care for his patients sparked an interest of a future career in medicine for Steve.

As time marched on, Steve found himself at Vanderbilt University, where he earned his bachelor’s in Mathematics & Physics. The year was 1970, and the Vietnam War was in full swing, and being drafted for the war was a very real possibility. Steve had a low draft number and lost out on the first round of the draft, so he enrolled in the Master’s program at the University of Florida, where he received his degree in environmental engineering. After earning his Master’s degree, the draft came around again. This time, Steve was drafted in the lottery and became a member of in the US Army where he spent much of his time in Germany. Through the army’s language school, he became fluent in German and other European languages, although German remains his favorite.

Upon returning to the states, Steve enrolled in the Medical College of Georgia, because he just couldn’t shake the dream of wanting to be a doctor. After medical school, he did his Family Practice residency at John Peter Smith Hospital in Ft. Worth, Texas. As a resident, he vividly remembers a certain nurse named Julie Benet catching his eye. Julie worked in the medical ICU at the time, and to quote Dr. Taylor, “I liked what I saw.”  He says that once he caught a glimpse of her, he made up every excuse in the world to make a trip up to the ICU to talk to her. “Do you need any more beds up here? Do you need me to bring more supplies to the unit?”  All of those lame excuses must have worked because Julie Benet would later became Mrs. Julie Taylor.

After finishing his residency, a full-fledged Dr. Stephen Taylor, he was hired by John Peter Smith Hospital as an Emergency Department Physician. He spent three years in the ER before moving to Durango, Colorado, where he practiced medicine on the ski slopes. Literally, Dr. Taylor laughs when reminiscing about his time there. He says that he would keep a pair of skis in his office. Ski patrol would call him about injured skiers three to four times a day. He would tend to their injuries, pop his skis on, and ski the rest of the workday. “It was the best job in the world,” he said. Then, in 1986, Dr. Johnny Haynes of Vivian, Louisiana, came calling.

Dr. Taylor remembers that in the early days of his practice in Vivian, he worked a lot of hours and got a whirlwind lesson on the ins and outs of small-town life and rural healthcare. Keep in mind that Dr. Taylor had trained in the big city of Ft. Worth and had tended to ailments of vacationers at a ski resort. So, when he set up his practice in Vivian, Louisiana, it must have been quite the culture shock to learn that the town didn’t even have an ambulance service. Dr. Taylor says that if a person required an ambulance, locals would just transport them to the emergency room in the next best thing… the back of a pickup truck. At the time, there was a community member who would graciously drive patients to the ER in the back of his privately-owned hearse; for a fee, of course. However patients got to the hospital, Dr. Taylor provided high quality care to people that would become long time patients and friends.

When talking to him, you’re sure to realize that Dr. Stephen Taylor is a very intelligent man. His intelligence in the field of medicine has guided him over the years as he took care of the people of Vivian and its surrounding areas. More than that medical intelligence, Dr. Taylor is very obviously a man who genuinely cares about the human condition. Of course, he has experienced the joy of parents as he delivered their child into the world, but he has also seen people at their lowest. Dr. Taylor has often been the one to tell his long-time patients and friends of a terrible, life-altering diagnosis. One of his patients said that after she learned of her son’s devastating condition, he looked her straight in the eyes and said, “How’s your marriage?”  Confused, this mother questioned the doctor’s question. Dr. Taylor gently explained that the diagnosis would put a strain on her marriage but that with teamwork as husband and wife, they could manage… and they have. She says now she understands that Dr. Taylor, though knowledgeable about her son’s diagnosis, was truly concerned about her life outside the diagnosis. It’s something that stays with her to this day.

On the other side of a brilliant career, Dr. Stephen Taylor gives all credit to his bride, Julie. When asked about his sacrifices given for his profession, he said, “Julie sacrificed a lot more than I did.”  He proudly explained that she took it all in stride when he couldn’t be there on holidays because duty called. He admires her strength and character in the raising of their two children and her ability to keep the home fires burning, despite the hustle and bustle of life. Julie supported her doctor 100% when he ran for mayor of Vivian and won, serving three terms. “And because she was a nurse by trade, she wouldn’t let me get too far if I complained about nurses.” So, there’s that. Julie Taylor was really good at keeping her MD husband humble. All marriages are a delicate balance, but the Taylor team found a way to make it work when it came to a medical practice, community involvement, children, and each other.

Dr. Stephen Taylor will see his last patients on January 7, 2022. What a ride it has been! There are so many memories and so many great stories. You would think that for a doctor that still takes twenty-four hour OB call, he would have a different answer, but when asked if he will miss his job, it was an immediate “yes”. But, Dr. Taylor figures that retiring now is part of his journey. He says that he wants to travel, eat, learn to play the piano a little bit better, and catch up on the thirty-five year list of honey-do’s that Julie has waiting on him. A nice retirement party awaits him, and he tears up when speaking of a man who will be attending. “He almost died in the ER one night when I was on call, but we were able to save him. That guy is going to be at my retirement party.”  Talk about a full circle moment.

Dr. Taylor has seen and done a lot over the past thirty-five years in medicine. He’s witnessed every human emotion on the spectrum. He’s been privy to both miracles and tragedy. Through it all, he has been a caring physician, a loving husband, a proud father, an involved community member, and an all-around good man. Take a bow, Dr. Taylor. You did it right. You were able to carve out a life and career in a certain corner of the world called Vivian, Louisiana. Your efforts and success have meant so much to the people who call you both doctor and friend. Thank you, and happy retirement.